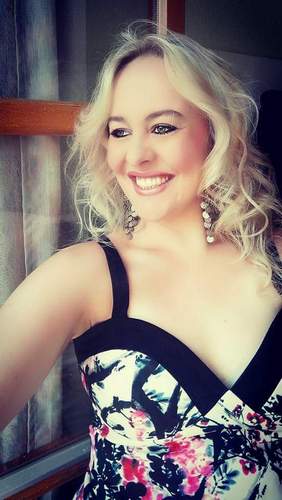 Leah holds a Masters of Music (MMus) degree specialising in Opera (Performance and Dissertation), under Prof. Virginia Davids and Prof. Hendrik Hofmeyr at the University of Cape Town Opera School (South African College of Music) in 2019.

She is the only South African to be selected as one of 24 International semi-finalists to participate in The Hong Kong International Operatic Singing Competition June 2018 in Hong Kong and she was invited by Dame Kiri Te Kanawa for a masterclass.

Leah is a Fleur du Cap Theatre Award nominee in the category for the best performance – Female – in an opera for the role of Queen of the Night from Die Zauberflöte (W.A. Mozart) that she performed in November and December (2017) at the Artscape Theatre in Cape Town.

Leah recently sang the role of Hanna in Lehár’s Die lustige Witwe at the Cape Town Suidoosterfees in the Artscape Opera House in April 2019. She sang the role of Violetta in Verdi’s La traviata at the Johannesburg Theatre in June 2019.

Leah recently sang the roles of Fiordiligi in Mozart’s Così fan tutte as part of the Opera in Darling initiative in Johannesburg, the role of Marguerite in Gounod’s Faust in the Pretoria State Theatre and the role of Countess Rosina Almaviva with Tshwane University of Technology (Opera) in their production of Le Nozze di Figaro (W.A. Mozart).

Leah was a semi-finalist in the Voices of South Africa Trust Competition in Cape Town (2017) and she participated in the 6th UNISA International Voice Competition in Pretoria (2018).

In 2017 Leah was the soprano soloist in Handel’s Messiah with Maestro Alexander Fokkens conducting and she sang the soprano soloist in Mozart’s Mass in C Minor with Maestro Alexander Fokkens conducting. In the 2nd UNISA National Voice Competition held from 8-15 July 2017 at UNISA in Pretoria, Leah was one of the six semi-finalists and she won the Opera prize for the best interpretation of an Opera aria. She was invited as one of 43 singers worldwide to audition for the BBC Cardiff Singer of the World Competition in Hamburg, Germany. Leah performed as soprano soloist with visiting German conductor Bernhard Gueller with the University of Cape Town Symphony Orchestra on 23 August 2016 in the Baxter Concert Hall in Cape Town. She performed the operetta aria “Meine Lippen, sie küβen so heiβ” from Giuditta by Franz Lehár. In 2017 Leah performed the role of Clorinda from La Cenerentola (G. Rossini) in the Baxter Concert Hall in Cape Town in September.

In 2016, Leah was one of the 100 contestants in the 35th International Hans Gabor Belvedere Singing Competition hosted in Cape Town South Africa in July. Leah recently performed at the Darling Music Festival in the opera Die Entführung aus dem Serail (Mozart) where she played the role of Blondchen. In May 2016, she gave a solo performance at the Greyton Classical Music Festival. In March 2016, Leah was the soloist soprano at Last Night at the Proms in Cape Town City Hall with Richard Cock conducting. Leah was invited as one of 15 international opera singers to attend the Internationale Meistersinger Akademie held in Neumarkt (Germany) in July – August 2016. At the Internationale Meistersinger Akademie she worked with and had masterclasses with acclaimed directors, conductors, orchestras and coaches.

In May 2015, she sang the role of Violetta in La traviata (Verdi) performed at the Artscape Opera House. In October 2015 Leah was the soprano soloist in Beethoven’s Missa Solemnis in Johannesburg with the Symphony choir of Johannesburg and the Johannesburg Festival Orchestra with Achim Zimmermann as the conductor. Leah performed the role of Older Bessie in one of the new Four:30 Operas made in South Africa - Bessie: The Blue-Eyed Xhosa at the Artscape Theatre in November 2015.

In June 2014 she sang the role of Madame Lidoine in Poulenc’s Dialogues of the Carmelites and the role of Contessa di Folleville in Rossini’s Il Viaggio a Reims. In October 2014, she performed as soloist with the University of Cape Town Symphony Orchestra under conductor Arjan Tien with the aria “Ah! non credea mirarti...Ah! non giunge” from La sonnambula (Bellini). In July 2014, she was the soloist in Gebed om die Gebeente (Prayer for the Bones), Chamber cantata for soprano, flute, cello and piano, composed by Hendrik Hofmeyr. In November 2014, Leah won The Schock Foundation Prize at UCT for the best female vocalist. She is an experienced performer and is often asked to perform at a wide variety of social functions.

She completed her undergraduate studies at the University of Stellenbosch and obtained her Bachelor of Music Degree (BMus) Cum Laude in 2013. In the same year, she attended Master classes with international acclaimed tenor Kobie van Rensburg, and she was awarded a number of bursaries as an undergraduate, and was also the first first-year student to win the Mabel Quick Singing Competition. In 2013, she achieved 90% in the UNISA Grade 8 Singing examination. She has appeared as Dido in Purcell’s Dido and Aeneas under the direction of international mezzo-soprano, Michelle Breedt, and as soloist in Mendelssohn’s Hör mein Bitten, Saint-Saëns’s Christmas Oratorio, Handel’s Coronation Anthem and Schubert’s Mass in A-flat Major.

Leah was a finalist in the 2011 Muziqanto Singing Competition, the 2012 FMR/Pick 'n Pay Music Competition, and the 2012 National Grahamstown Music Competition, where she won overall second prize and she won the award for Best Vocalist. Furthermore, during the rest of her school career, she won the best female vocalist cup for twelve consecutive years (1998-2010) at the Stellenbosch Eistedfodd. She also received numerous awards for the Dramatic Arts and is an accomplished actress.

Leah Gunter has always had a burning passion for the performing arts and already started her singing career at the age of nine when she sang in the production – The Mysteries – that took place at Spier and directed by acclaimed Mark Donford-May.